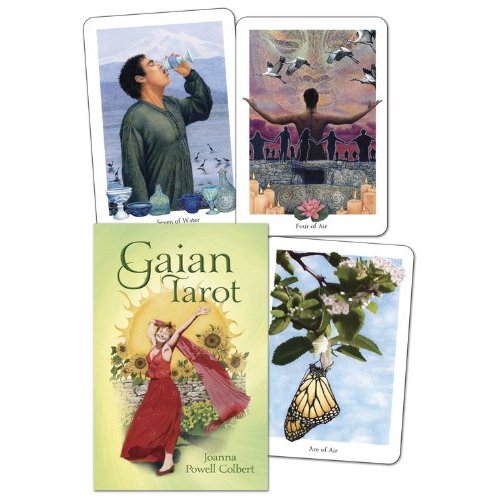 If you could own a Porche at the price of a bicycle,

wouldn't you jump at the chance?

So it is with The Gaian Tarot.

The Gaian Tarot was first available as a 22 card Majors-Only Limited Edition deck that sold out before it went to print.

Gaian Tarot deck creator, Joanna Powell Colbert, then married her colored pencils and spent nine years creating the rest of the deck to create a 78-card Collector's Edition deck. This full deck was created with environmentally friendly materials, available in either of two sizes, included a full-sized handbook, herbs from Joanna's garden, a hand-made amulet created with your choice of the deck's images, a matted picture of her Seeker (Fool) card with a poem, and....a print of any card from the deck that you chose. The cards were blessed and distributed worldwide and sent with a raspberry-colored handmade, hand-died, fabric pouch with a drawstring. 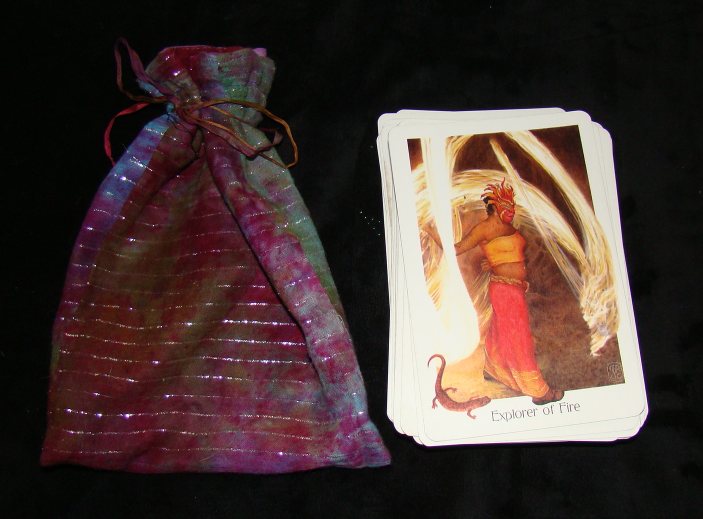 MY DEAR FRIEND, THE GAIAN TAROT

I was so delighted to be able to work with this incredible collector's deck. I can still remember the sacred moment of its arrival when I opened the box, much in the way we remember where we were standing and what we saw during significant world events.

The Gaian Tarot also proved to become a dear and much-needed friend, especially during a particularly sensitive summer when I was facing my mother's diagnosis with  an aggressive and terminal form of dementia. I was unable to use many of the bold decks I loved so much because the messages were too strong. The Gaian, however, nudged me along my path with the voice of a supportive friend. I was grateful to have this sacred time with the deck before the Mass Market edition arrived.

This collector's deck, a significant investment to tarot enthusiasts with a price tag of $249, became available this season on the Mass Market through Llewellyn Publications at a new, low price which ranges between about $20 and $30. And now, this incredible tarot deck with stunning art and gentle nature images is affordable to anyone who enjoys tarot. 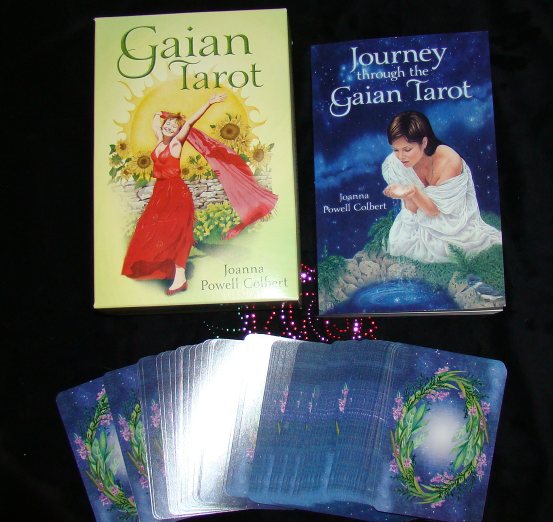 It is worth mentioning that ~ of the full, 78-card Limited Edition ~ two sizes were offered.  I chose the big size. The smaller one, I am told, is more simiilar in size to the new, Mass Market edition. What you see in the below pictures is the larger Limited Edition being compared to the Mass Market version. Let's talk specifically about the deck qualities, as opposed to any extra items included with the Limited Edition version.

Both include a full-sized book.

Both are stunning decks that are not only contain beautiful art, but are also an absolute delight with which to do readings.

The paper quality does vary between the two books, with the Limited Edition having a whiter, slightly thicker and smoother stock.

The actual text of both books is nearly identical in how the book reads, word for word, though the layout has been changed slightly. The Limited Edition  includes crisp, black and white images of every card alongside the card descriptions, and includes some gray margin boxes that highlight certain parts of the text; the Mass Market book does not include card pictures nor does it have the margin boxes, though the text that was in the margin boxes remains.

The Mass Market book has more pages, but this is due to the smaller size of the book causing the text to overflow onto more pages. You will see below that the covers are significantly different. 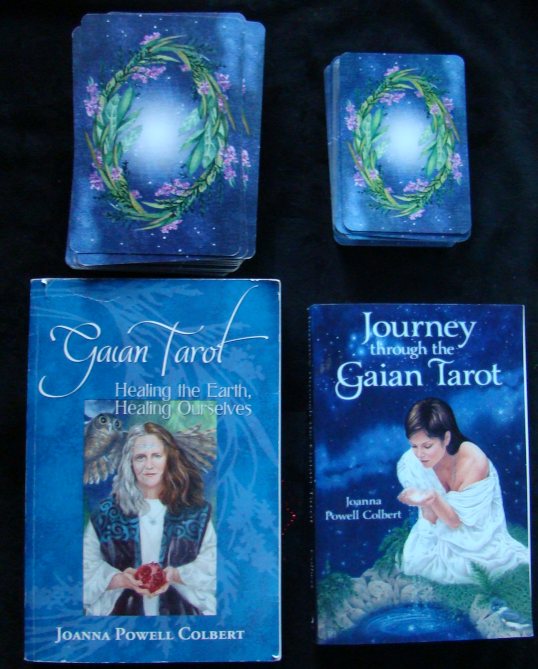 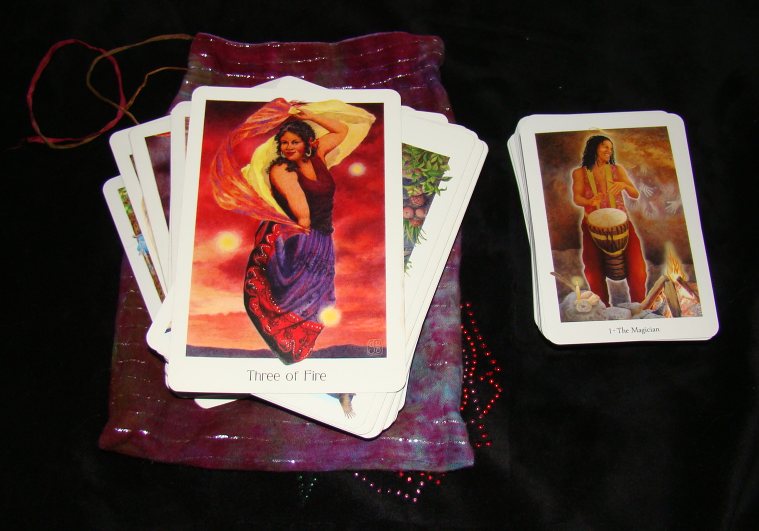 Both the Limited and Mass Market versions have a clean white border, and both feature the slight overflow of some small item in the image into the border of many cards, giving it the illusion of popping out of the card and into the border, a lovely and unique effect.

While the card stock feels nearly identical in thickness when I compare them, the Mass Market edition feels just slightly stiffer, likely for two reasons:

1) the card is smaller, with therefore less bend space, and

2) the glossy lamination on the Mass Market version seems to "thicken" it up a hair.

The font is, in my opinion, more elegant and takes up more space on the  card in the Limited Edition. Still, I do like the choice of font in the Mass Market version, and while I would have liked it a wee bit bigger, I am not complaining...it is unobtrusive and classy. 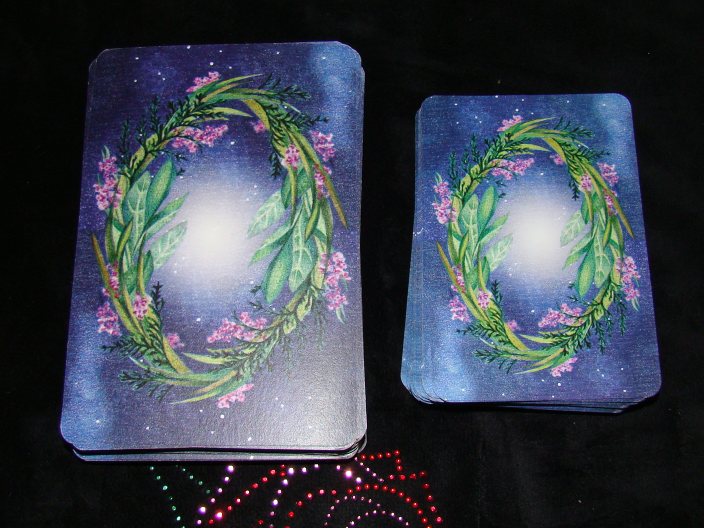 Both versions have exactly the same card back,

about the Mass Market Deck:

All cards of the deck are identical to the original version except for two exceptions.

One difference is seen in the Two of Fire: 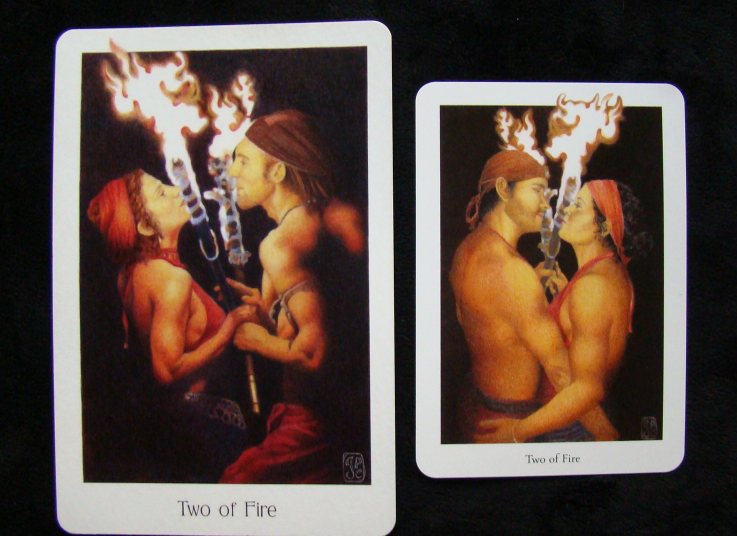 The Two of Fire in the new, Mass Market version shows a similar composition, but you will notice different models and positions. The card was altered due to copyright limititations on the original picture's models and and the limited agreements for the use of their likeness by the photographer. The new version showcases different models in similar clothing and they have switched sides. The Limited version looks  a bit more lusty; it hits you right in the loins. The newer version has a softer, more compassionate feel to it, still a lot of love involved, albeit more subdued and quiet in energy.  For some reason, I get the impression that the Limited Edition card on the left shows a couple in a crowd, but they have centered in their own space. The newer card on the right looks to me as if they could be slow dancing alone, with no one but the stars to observe their gaze.

The second  difference is found in The Builder Card, below, which features Joanna's husband as a model, is the same picture under a new name: 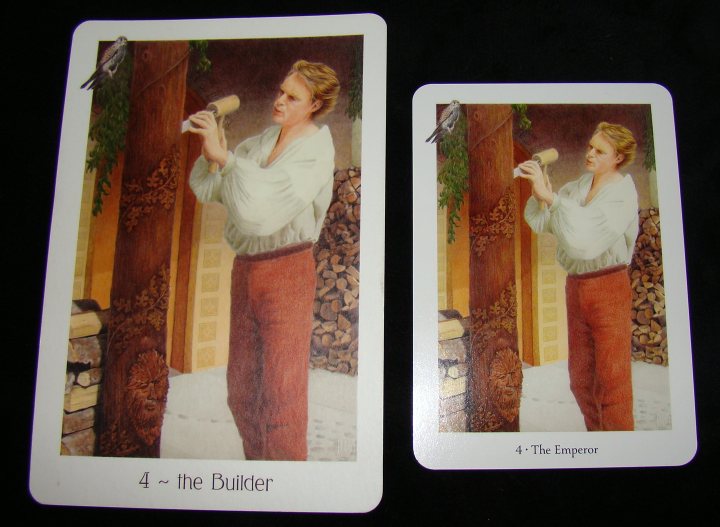 Joanna laughs that this was a slip of editing, where she  and others did check the cards, but no one had realized that the title of this one card had been changed from "The Builder" back to the traditional Rider Waite Key Card #4 name:

Joanna notes that Llewellyn has agreed to replace these Emperor cards with Builder cards at the deck's second printing, for anyone who purchased this first printing of the deck. I suggest hanging onto those Emperors! Like a coin misprint can increase its value to collectors, this Emperor may be a big collector's item for your grandchildren who would do anything to get their hand on that deck with the misprint Emperor Gaian Tarot card.

If you would like to learn more about the structure and imagery of Joanna's Gaian Tarot, listen to our interview with her on Your Tarot Tribe: Beyond Worlds, on 6/27/10 CLICK HERE or click the image link below:

Joanna returned this past weekend with James Wells to work with the deck and to talk more about the Mass Market version that is newly available. You can hear that HERE or click the image link below:

HOW TO PURCHASE THE DECK

The Mass Market deck can be purchased online and at major book retailers worldwide.

I recommend your local family owned bookstore, or may I suggest www.TarotGarden.com.

The Limited Edition, 78-card deck, at the time of this writing can still be purchased at www.gaiantarot.com/shop/gaian-tarot-limited-edition.

Be sure to check out the website for all the extra goodies you'll get with this collector's deck.

Both decks will not only allow you to connect deeply with the earth, nature, and community, but will also allow you to do some serious soul-searching to connect with yourself. Enjoy the natural exploration.

Here's wishing you a tarot-filled week of Earthly pleasures and personal soul growth through the Gaian Tarot.