How to Ask Negative Questions of the Lenormand (Flip It!) 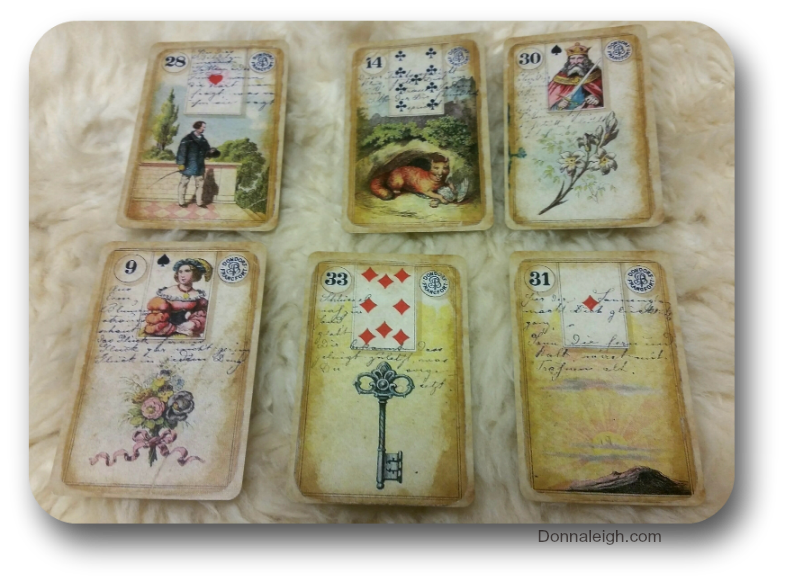 The above cards are from an actual reading (deck shown: Le Fanu's Destroyed Dondorf Lenormand).
The client asked: "Is he lying to me?"
Setting Up Your Question/Reading for Success:
Positive and Negative Card for Answers
When learning how to do yes/no questions for Lenormand, one of the first things you'll need to do is note the positive or negative attributes of cards. This works great when you have a positive question that requires a positive answer for a yes, "Will I get the job after this interview?" or "Will my love interest ask me for a date?"
However, if you word a question in such a way that the Lenormand is forced to answer negatively for a yes "Is the situation going to be bad for me?"  or "Is she out to get me?" .... you have now set up your reading to fail. If a "bad" or negative card comes up...does a negative card now valildate "yes," that something bad is going to happen? Or does a negative card continue to mean "no," that the negative thing will NOT happen?"  See how confusing things suddenly became?  I see readers getting tripped up a lot interpreting negative questions because a negative card should not be forced to mean "yes."
Prepare for a Clear & Successful Reply
Let's talk about how to set up the same question for success.  You must setup a clear language system for communication between you and your cards. You have to be speaking the same language.
The cards pictured above are an actual reading where the querent wanted to know "Is he lying?" But this type of question would mean that negative cards that typically mean "yes" would now require a no to indicate a "yes."  Fox and Snake are usually "no" cards, but here we may seek them for a "yes" because they suggest betrayal or dishonesty. So if a negative card comes up....what do we do with it?  Fox is negative, but it also means "a lie."  So is it a "yes" or a "no?"  You don't want to force negative cards to contain a positive (" yes") reply. You'll get confused. Let positive cards affirm, negative cards deny.
Keep the question, but FLIP IT.
Flip the question so you're asking the same thing but approach it so you NEVER require a negative card to reflect a positive/affirmative "yes." Ask the question in such a way that the positive cards would reflect a "yes" and negative cards would indicate "no."
So instead of, "Did he lie?" ask "Did he tell the truth?"  If he did lie, you'll still get the answer of betrayal from the cards. But now  you'll understand what means"yes" and what indicates "no" when you read the cards.
Flipping Questions from Negative to Positive
Let's try a few other examples.
Instead of "Is she betraying me?" (would Sun mean Yes? or would Snake?), ask something like, "Is she acting in a loyal manner to me?" Now the answer will be clear.
Instead of "will I get laid off?" (will Coffin mean "no," or the ending of the job?, or will Sun indicate "Yes, it's lost?"), ask "Will I continue to work in this job for the next _________ (state time frame)." Now you know what Coffin or Sun would mean.
Lastly, instead of asking, "Is this veterinarian a bad choice?" ask, "Is this veterinarian the best choice for my dog's health care?"
Don't change the question you're seeking,
but rather set up the answer for clarity & success
To clarify: it's not that you can't seek answers to negative situations, but rather word your question for clarity when the cards attempt to answer you. Set yourself up for a clear reply. "Yes" should be positive cards, "no" should be negative cards. So never set it up so a yes would require a negative card for a yes.

What is the answer to the Lenormand reading pictured above?

For the cards above, we want to know whether the man is being honest. Note that here, the question was NOT "Did he lie?" ..although that is what she wanted to know. Had we asked that, if negative cards are supposed to mean no and positive cards yes, you'll confuse yourself with the reply. So ....she wanted to know if he lied, so we get clarity by flipping it to "Is he being honest? " So then, positive cards would mean yes as it usually does and negative cards would be warnings. Same information, clearer approach.

Her Question: "Is he being honest?"

Lenormand's Answer: There is a little lie, but don't worry about it.

Card interpretation: See him in a good light (man/Bouquet). The key (Key) here is that he has to be slick (Key/Fox). Consider it like a little white lie (Fox/Lily, Key/Sun). Give him a hall pass this time (two good cards at the end show peace and joy (Lily/Sun). The little lie may even be fully exposed (Sun) in the future (right column), and you'll see it is a peaceful and harmless (Lily) one. But yes, right now a little white lie has settled in (Fox/Key says "yes").

Below is a quick, 48-second video demonstration of the "Flip It" method,

If you cannot see the above video, go to: