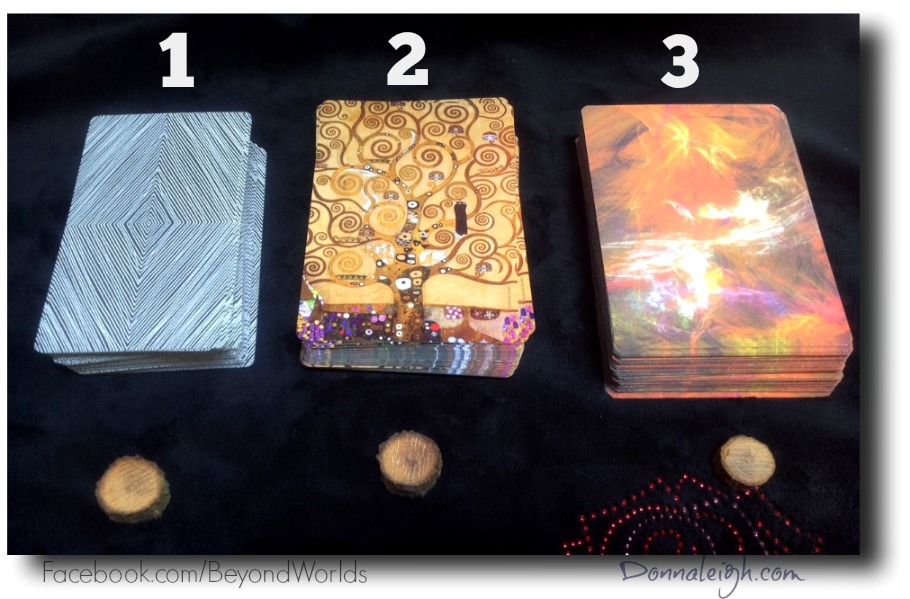 Welcome to my Tarot Table!

I've taken out 3 lovely decks for you today.

Which deck is calling to you for a reading?

I've also thrown in a rune with each deck for good fortune.

Pick a deck, and let's see what card awaits you this week.

TIP: You may want to hover your hand over each one to see which one pulls you. Do you feel a pull? Or a warm spot?  Maybe you have a pendulum you can use. The card you pick will embody something energetic around you for the next week.

Once you choose a card and feel confident with your choice,

scroll down below for your personal reading. If you chose Card 1

DECK: The Wild Unknown, 2 of Wands

Oh, Heavens to Murgatroyd! We have what first appears to be a stalemate here. Both wands won't budge, because each is prepared to win (rune wunjo).  There are two closely matched forces here, and while each may feel protective, look at how similarly they are matched. While they stand in limbo, tip to top, there remains significant tension. And yet at the same time, there is no progress made despite the tense energy at work.

Notice that the two sticks here look much like a pair of chopsticks, two separate pieces that actually functions as one tool. There is a message here that if these two forces ever joined, what they'd be able to gather together would be two-fold, a much bigger victory than either solo stick could lift alone.

Or are these two sticks that when they rub together long enough, they create a spark of fire? How would that fire be used? Would the fire something of creation or destruction??

The way these sticks are used will determine the force they create.  They can skewer like shish kebabs, or they can reach toward an item that is too tall for us otherwise to reach. How will you use this tool, this wand, this agent of energy before you?

The 2 of Wands speaks to us of sheer determination and will power. It is a forward-thinking energy that needs to connect with something. But the energy is contained until it is put to use. How will you decide to use the tool?

Who is it that holds the other chop to your stick? How can this double your assets?

"Every successful individual knows that his or her achievement

depends on a community of persons working together."

If you chose Card 2

This picture of Cupid includes a quote that says, "There is no instinct like that of the heart." And with such an empathic card, this Cupid appears more focused on the other than on himself right now. Or is he? Is there something in this woman under the fruit tree that may contain something he needs (rune Nauthiz)?  Is his knee-jerk empathic rescue really to her best interest?

This week, note how your heart's desire is functioning. Is it working toward something that is truly for the benefit of the other, as you have allowed yourself to believe? Or is it actually something you need within yourself?

If you approach the person/need, will they remain asleep if you become involved and act for them? Is there any work for them to do? What haven't they realized yet? Is it your responsibility to hit them with the arrow so they see things your way? Or will they be able to see it your way until they actually bite of the forbidden fruit themselves and get personal clarity that can be given no other way than through direct experience?

The empathic Page of Cups is willing to help and reach out. When someone is in need, this sweet Page wants to be of service and lift the other to a place of healing.  And yet, sometimes by carrying someone, the other may not be able to learn to walk.

This week, instead of fully doing for someone, there may be better education in guiding the person by doing something on their own, so that a little work is involved. You may find that this gives them great pride, even if they fear something a little bit, as nothing good was ever earned without a little elbow grease.  What do they need? Can you share with them what might help them make the next step and yet allow them to stand up and take action on their own? Are you able to love by allowing the other to create rather than creating for them?

This week, there may be someone in need, but they may not see exactly what it is they need, as obvious as it may seem to you. You may know something that would benefit them in their process, information that will guide them to their awakening. And yet, by respectfully sharing the knowledge, can you still allow them the dignity of creating it on their own, and in their own time?

Another consideration is to consider which character you are in this card. Perhaps you are the sleeping woman rather than Cupid. There may be something YOU may need to do on your own to create your own growth, your own enrichment, your own soul journey. Another may not need to bring it to you...it may be your time to shine by standing up and making the moment yours alone. Are you ready to rise? What is it that you need to learn to do on your own that you are convinced needs to be done by someone else?

“...to learn and not to do is really not to learn.

To know and not to do is really not to know.”

If you chose Card 3

Ah, last week we had this come up as well. Did you choose it then, too? Sweet Justice seems to be righting a balance and is still at work. There seems to be much to do in the resetting of the balance.

While one side may feel freaked out, the other can maintain a sense of calm. Which side will you be on will be determined by which balance needs to be righted. Justice doesn't judge by the person; it just acts on the energy to bring it back to center.

Remember, Justice can be either pleasant or unpleasant. It maintains a sense of order. And it may be seen differently on one side than the other side perceives it. Yet the neutral Universe sees things from that neutral perspective and just resets the balance.

After shuffling the deck and choosing this card for you, I noticed that one card was accidentally left behind in the pouch. Realizing this card likely represents the Hidden Influences in this situation, I drew it out of the pouch.

This 8 of Earth is read differently than in some decks. The key word is "Despair," and someone feels confined, frustrated, and they wither as if their hopes are dashed. The injustice likely happened because of this influence of despair, its accompanying loss of hope, and desperate need to regain faith in themselves.

Though the surprised recipient of the injustice may not have received the energy as if it were a state of despair or hopelessness, this is where the tilt began. There was an acting out, a grappling to survive somehow. Someone was frustrated against obstacles that impacted their hopes. This became a furious struggle against what they felt was adverse conditions. But was it really? Did they really just sink themselves deeper by the illusion of needing to be an adversary? How does the pendulum swing when it's pushed in the direction of an illusion?

Justice is at work this week in a big way. Stand back and let it do its own balancing act. You need do nothing but observe, unless you're involved in the tilt of recentering. Was it your despair that initiated the shift, or was it another's?

The rune here is about inheritances and what we inherit. Is someone claiming an inheritance and the balance is being set because it may never have been fully theirs? Is someone creating their own justice inheritance by something they initiated out of fear or despair?  Often what we inherit in a will is based on the relationships we hold with people around us. So if this Justice is to leave an inheritance for those involved, who's going to get the lion's share of the pie based on how they made someone feel?

“I've learned that people will forget what you said,

people will forget what you did,

but people will never forget how you made them feel.”

Here's wishing you a week of forward motion,