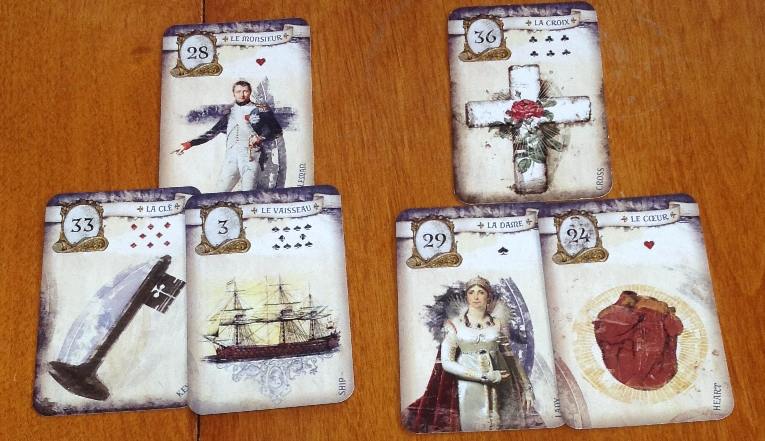 "We hear only those questions

for which we are in a position to find answers."

Asking Questions of The Lenormand Oracle:

A reading is only as good as its question. Everything starts with the question. A question that is poorly phrased results in a wishy-washy reading. Lenormand readings are clearer with a crisp, well set-up question.

Many people find themselves confused with interpreting readings, and the reason often comes down to a muddled question, or answering something other than was asked. Often a reader (especially someone new to readings) will ask a question and then start answering something else once the cards are down. While a large spread like a Grand Tableau sometimes lets us get around this, the smaller spreads require more specifics with our question.

Lenormand is blunt and clear, but we can easily muddle up an answer by asking one question and then proceeding to answer something else with the cards that come down. Be clear with what you expect a spread to define for you and stay within its communication parameters.

Note: With Lenormand, it is perfectly okay to ask Yes/No Questions. Use the below formats to be sure you are setting the question up firmly, no matter what kind of question you use.

1) Pay close attention to WHAT you're asking.

Are you asking what you think you're asking?

For example, when you ask, "Is this job right for me?" This does not mean "Will I get the job?"  For accurate and clear readings, be sure you are answering what you asked. Be familiar with the question you asked. Write it down if you need to organize it or remember it clearly.

Asking "What does he look like" is not the same question as "What does he act like," or "What is he thinking?"  If you're asking about physical descriptions, keep the meanings tight and related to physical attributes. If you want to ask about personality traits, don't blend those in; instead, set up a separate spread for those.

2) Make sure you'll understand the answer.

Ask a question in such a way that you'll be clear about the cards that respond.

"Is she still agoraphobic," then would Coffin mean "boxed in?" Or would it mean "The agoraphobia  is over now"?

Sometimes it helps (a LOT) to adjust the question so you will clearly understand the answer. In this topic of agoraphobia, I'd probably ask, "Is she able to leave the house now?" Then I'd know what Coffin meant (either trapped in a box, and ending a relationship with the outdoors). Garden would mean lots of people around outside, Bouquet would mean she went outside, etc. This makes it easier for you to communicate with the cards. You are not changing the subject about which you're asking, you're just shifting the way you word the question (be sure the question still clearly reflects what you want to know).

This is NOT the same as rewording a phrase in tarot to reflect the comfort of the reader. (i.e., The client asks, "Will he come back?" and the reader changes the question to, "What in you needs to be filled that causes you to hope for his return?"). Rather, in this case, we are just creating better communication with the cards, not changing the topic.

3) Avoid asking questions about negative topics in a negative way.

It's okay to ask questions about negative topics. Just be sure to phrase them so you can communicate clearly with the cards by shifting the question to create clarity in your answers. Twist the question to be phrased in a positive way for better clarity with your answer, even if you are seeking an answer about a negative topic. As in Tip #2, you are asking the same question, just modifying the phrasing so the meaning is clear and you and the deck have a common language.

For example, when asking something negative, it can make the response confusing (is a negative card a no? Or is it a double negative?). For example, "Will he get sick?" is a question about a negative circumstance. Does Coffin mean "yes, this is a card of illness," or does it mean "No, sickness is over, this is the card of something ending"? Instead, ask the same thing but twist the semantics so you're approaching it where a positive card will indicate "yes," such as:  "Will he be healthy?" Or better yet, "Tell me about his health (and define a time frame)," this will bring better clarity.

Are you asking about the present? If so, don't let your answer leak into the future. If you're asking, "How did he feel about her," then if the Ring comes up, he may have wanted a commitment ... back then.  But this is not the same question as, "Will they become engaged this year?" Keep your time frames  crisp and clear. Know exactly what you're asking. Don't start straying into a different time frame unless you specifically have cards down to define that time frame. If you are asking only about the past, don't let your answer creep into the present.

If you ask, "How is the relationship going?" this is a question that lives in the present tense and  does not mean "Will this relationship succeed in the future?"

If you're asking about the future, you may not want to discuss his ex wife in the reading unless she will be there in the future again. The future is not the time to talk about his past. Keep your time periods clear.

There are many spreads that clearly define time parameters for you (past, present, future), and those are very helpful. But be sure you don't start switching the "now" and "then" when you do those readings. That middle card is often a clear line in the sand between timed events.

Sometimes people will start mirroring cards on both sides of a past/present/future spread, blending times. This is not necessarily wrong, but know ahead exactly what this defines. Is this the current struggle between past and future? Keep clear communication parameters with your cards.

5) Create a clarifying spread if necessary.

If you ask one question ("is the job right for me?") and realize after the fact that you really wanted to know if you'll GET the job...keep the second answer separate and ask that separately by clarifying it with a second spread.

If you ask the question "Is the job right for me?" and you get the Ring card, it is possible the cards may be hinting that you will get it, and the spread may be attempting to tell you this. But does it mean you will be committed to it or that it could be something you'd stay at a long time, as you asked if it would be right? Clarify in a second spread if you realize you asked something too vague or that the wrong question was asked. Always be sure you are answering what you think you are.

6) Create a clarifying CARD if necessary.

The last card in a Lenormand spread is critical to your answer. If you don't understand the last card because it seems vague or unrelated to your question, draw another card or two to define THAT CARD.

I prefer two additional cards, and they often will brighten the answer for you when it seemed unclear at first. So if the last card leaves you hanging, let those 2 additional cards tell you about that card that left you in limbo.

This does NOT mean pulling more cards because you don't like the answer. This is about creating clarity if the last card doesn't seem to apply to your question or is too vague to understand.

If a negative card appears at the end of your spread and you're not sure what it references, pull two additional cards to define it more clearly. But remember, the last card was negative. If two positive cards define the negative card, apply this to how this card is negative.  What was the person expecting or what was the card denying?

I have two other blogs about asking questions (and answering them) with precision, and they include video demnonstrations.

Those can be found HERE and HERE.

To learn more about how to read the Lenormand,