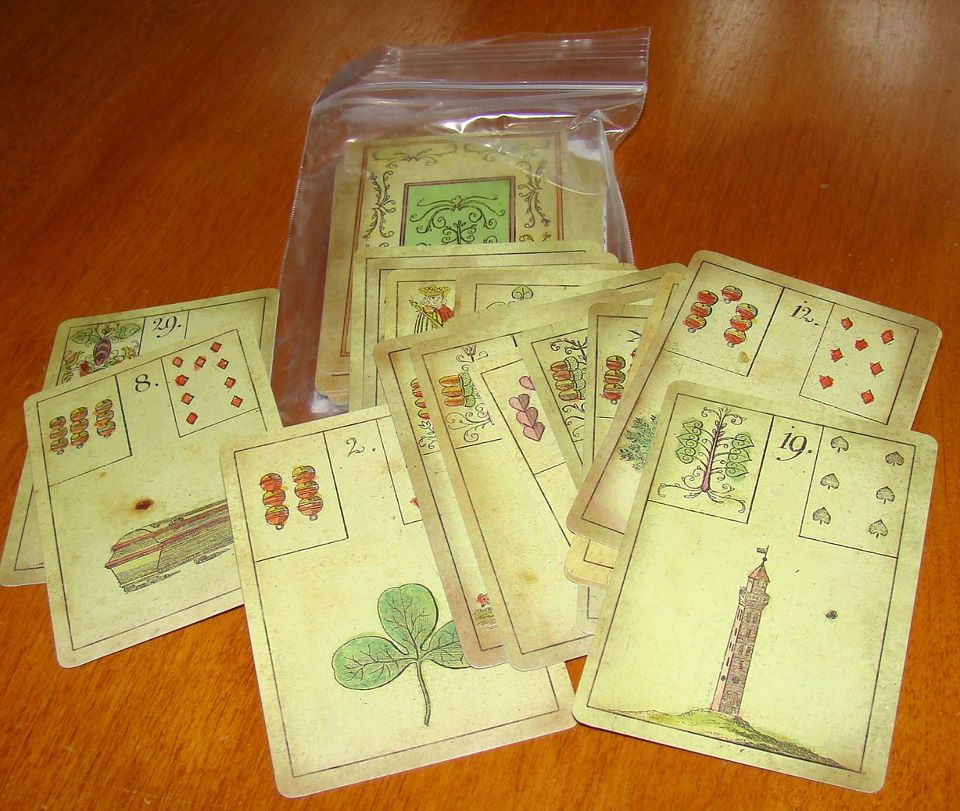 Restoration work on the deck was done by digital deck artist Ciro Marchetti, in order to maintain a uniform border and to better correspond to the physical proportions of this edition. Ciro also extended the aging of the cards along the border and designed the delicate image on the backs of the cards.

Ciro wrote of his work with the deck:
"The modifications we chose to make involved using sample sections of real fade, aging, stains and grime, and use that to extend the imagery to a full bleed card. Also a minimal adjustment of layout was applied to better fill the taller and narrower portrait proportions of this printer's template. No modifications were made to color tone, hue, or intensity."

Style of Art -They appear to be antique pen and ink drawings that were   colored in back in the day. The deck has an "Olde Tyme" feeling to them. The art is simple and clear. It looks old because it IS old. These images are built off original scans of 200 year old cards. They are reproductions of cards which have passed through the ages. 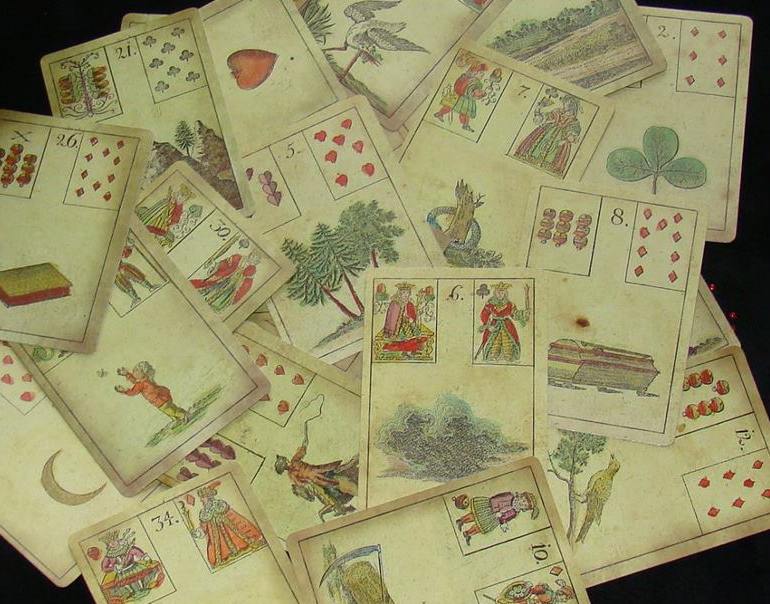 Description by the Publishers of the Deck:

Card stock - Normal to thin thickness of card stock. Not too thin, not  bulky and light. The thickness chosen makes it easy to shuffle considering the small size of the deck.

Ease of shuffling - Shuffles fabulously and smoothly like a typical deck of playing cards. The cards bend nicely.

Lenormand decks are preferred small by most traditional Lenormand readings due to the large space that would be otherwise needed for the cards in a Grand Tableau spread (a Lenormand spread that uses all 36 of the cards at once). The size of these cards is comfortably small. They are easy to shuffle and handle.

They are very easy to see/read. The cards are uncluttered and the images are easy to identify when a reader switches to this deck from another Lenormand. The exception for me was the Broom/Whip card, which I did not recognize at first.

Color-There is a charming, antiquated appearance to the deck. Card fronts have an endless variety of chips, scratches, dings, stains, hairlines, and scuffing to give the deck a vintage look and great variety between cards. The backsides, on the other hand, have a very uniform template for the scuffs and shadows. This uniformity is of value to the reader, who will enjoy a variety of authentic-looking aging and scuffs on the fronts of the cards, and yet will not be able to differentiate cards by looking at their backs. The uniform coloring on the back sides keeps the fronts a mystery.

Marcus notes that the borders were not artificially aged. "Ciro simply bled the existing backgrounds to the edge of the 'template card' shape to avoid having a black or white border, which in turn would have been misaligned to the card image."

One thing that is noted by many owners of the deck, myself included, is that the beige appearance of the cards appears to have more of a greenish cast in person. I thought this to be a printing glitch; it appears more evident in natural light than in incandescent lighting. At times the deck takes on a buttery beige tone...it is like an Alexandrite jewel that morphs in different lighting (mood ring?). But the hue of all the cards in the deck is uniform. They all appear similar in color tone.

As for how I see the cards, right now, I don't see the greenish cast. An hour ago, it was very evident in my deck. I'm in the same room, same place. I cannot seem to get my camera to capture the green, no matter how I try, as it auto corrects the color.

Marcus notes of the coloring:

"With regard to the tint, we are not sure this is actually a 'printing glitch' as we can only compare the cards to the originals, as a photo - even the 'original' photo, will not display exactly/consistently on any screen in comparison to the physical images. The originals - the actual originals - were very dirty and worn, on 200-year old card, so actually looked brown and dirty, if anything, and very faded. So we are glad they are not looking "dingy" in the printed version.

"Our intent was to create something that would 'age quickly' whilst being usable, so as the deck gets used and worn, the antique look will become even more "authentic", making the cards unique and special."

Backside - The card backs feature an elegant floral pen and ink motif. It is delicate, and the design feels fully representative of the time period. Though Lenormand readings do not traditionally encompass reversals, the cards would honor reversals. The vine-like swirl of images edging the cards go back in time and have a very placid, antique feel to them. The image marries the mood of the fronts beautifully. Ciro explaned, "Because I didn't draw the pen and ink floral shapes, I extracted them from some of the cards and wiggled them into new shapes."

Had I not known fantasy artist Ciro Marchetti produced these backs, I'd have assumed them to be the originals; the personality match of card fronts and backs was beautifully orchestrated. I also never would have guessed that the creator of the backs could have possibly been Ciro, as they are so different from any of his other work that I've seen from him (high-powered, high-colored, dazzling digital realism with a play on light, which I also love). 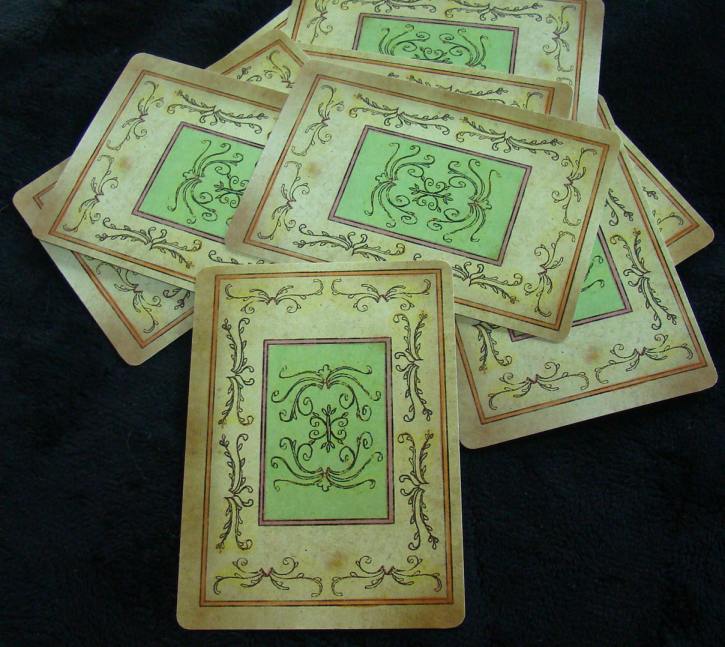 Number of cards -  38 cards. This deck includes the usual 36 Lenormand cards with an additional Man and Woman card, to be used for same-sex readings.

Of note are the double man and woman cards. The extra man and woman cards were provided for same-sex readings and are identical to the original man and woman (also in the deck). So the two man cards are exactly the same, and the two women cards are exactly the same. I'll end up marking one of each card so I know which one represents the querent in a reading...the marked or the unmarked woman, for example, and the unmarked card will represent the other person in the reading.  One way around this would have been to make a scratch or burn mark artistically on only one of each gendered cards to differentiate them from each other. As for me, I may put an unobstrusive mark on one of each man/woman card. 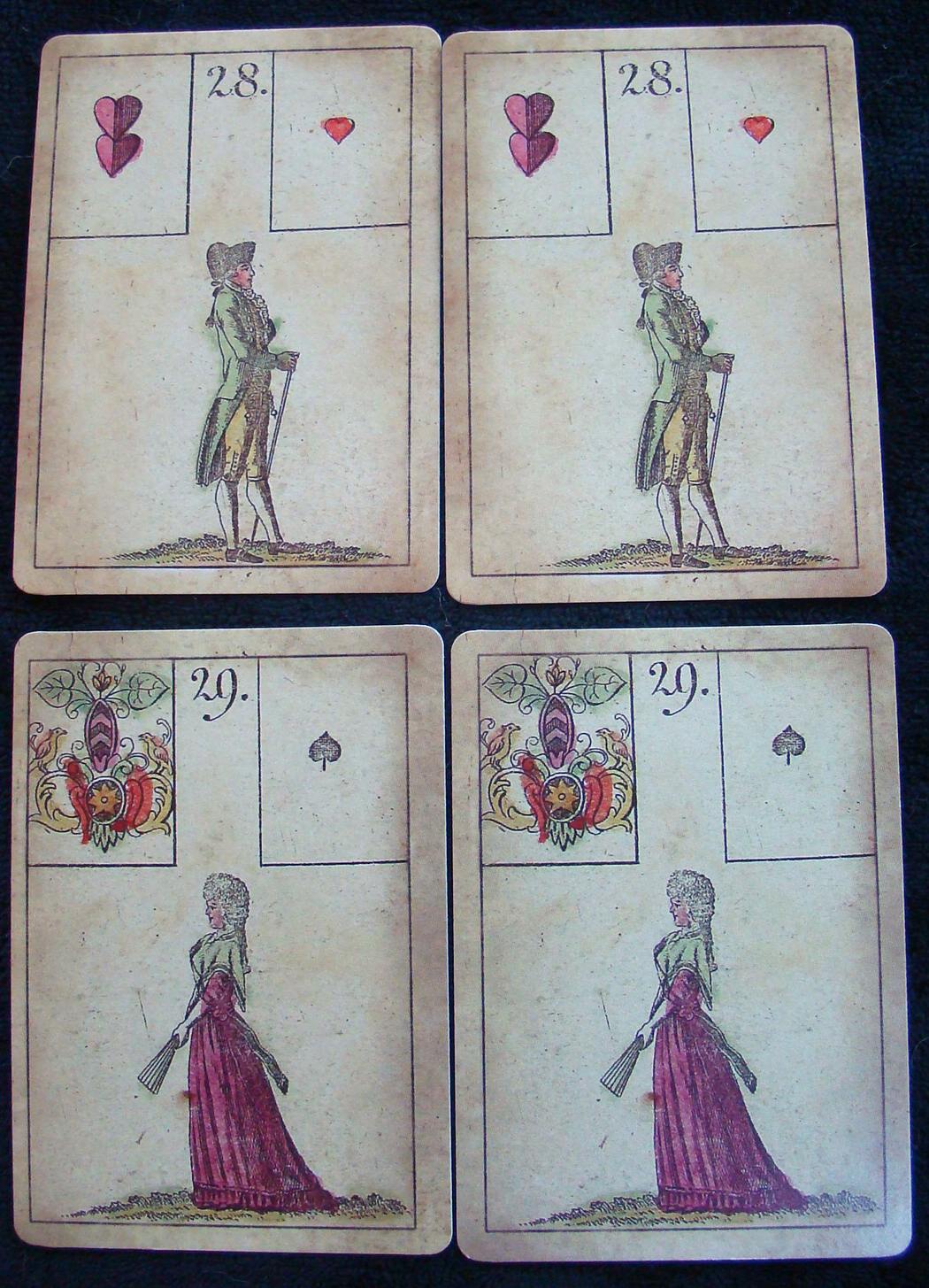 Elements/Suits - Lenormand cards do not incorporate elements into readings in the same way a tarot deck does. What this deck does provide is two card inserts on each of the Lenormand cards. One insert represents the playing card (either by court card illustration or playing card pip image), and the other represents the suit.  These are not typically an important part of traditional Lenormand readings except for the court card inserts, which may represent people for some readers. The double inserts here do add great beauty to these cards, however.

Font size/style -Slender font for numbers. Arabic numerals are used, which are typicallly used in modern writing today (not Roman Numerals). The cards are not labeled with key words or titles. They are defined simply by the card number.

Borders: Non-obtrusive simple line edging the cards without any difference in color. A very clean look that does not detract from the antique style of the cards. About half of the cards had borders that looked centered, while others had borders that were a bit off center. It did not detract from my deck, in my opinion, but perfectionists might object. Below, the top picture shows the one that is off, below that, the one that seemed centered.

Instruction booklet - No Little White Book comes with the deck. To learn how to use the deck, you'll need to use alternate sources. I've compiled some HERE. The deck creators suggest the reader visit the Publisher's membership website, or alternately, the book "Learning Lenormand" is recommended, written by the deck publishers Marcus Katz & Tali Goodwin. This book is expected to be published by Llewellyn in the Spring of 2013.

The deck is provided with the first English translation of the original game instructions, with the translationi provided by Steph Myriel Es-Tragon. This is a one-sheet, double-sided copy translation of an actual game that can be played with any number of players. Two ordinary dice are used and the cards are used as places on which to move, and the cards each represent a certain number of points. Points are tallied by "marks," which are exchanged throughout the game like currency or chips.  It is also suggested that an entertaining  game of oracles can also be used, with brief directions for this provided in the instructions as well. 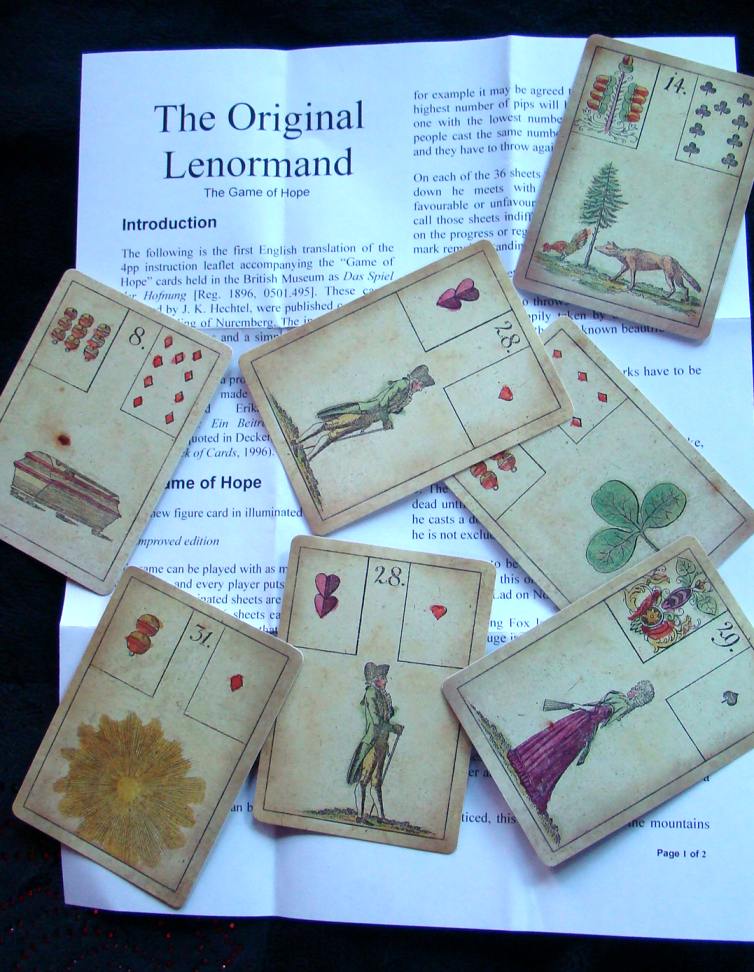 Packaging -The cards arrive without a box, but instead come in a clear plastic zip-closed baggie, with the game instructions folded withing. While some may be put off by there being no box, this was of no concern to me as I don't store most decks in their boxes. I will use a separately made or purchased, nice pouch in which to house the deck. 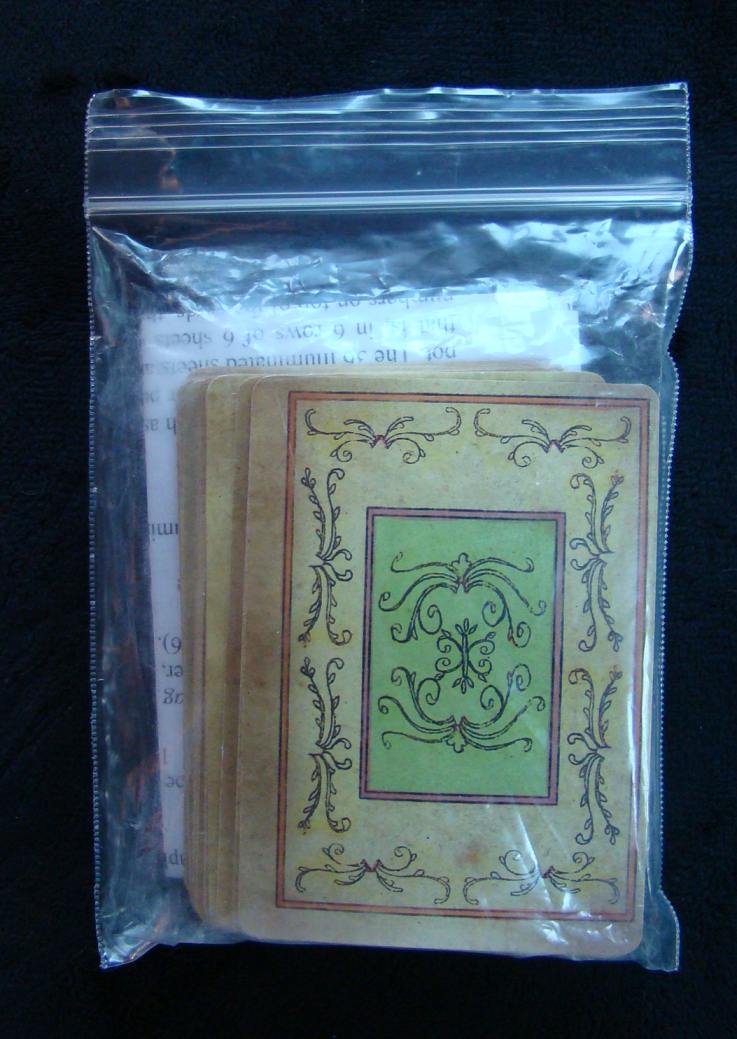 Unique traits -That this is the first known Lenormand deck is of great interest and value. The cards were beautifully enhanced to keep the old look, and this aged vibe contains much of the charm of the deck. The easy-to-see images are crisp. With some other Lenormand decks, I am not sure which card the image represents; but with this deck, I was very clear which card was which, other than the broom/whip card, which had a coffin-like image to me at first glance. 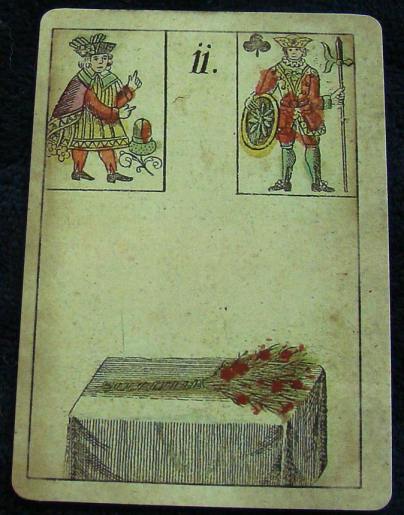 As for the restoration project's goal to keep the cards uniform in size by creating new borders, the outcome was successful. Ciro's digital work helped the cards go from the original, awkardly-edged (and curled) scanned images such as the one below at left ...  to the completed, crisp-edged card (below right), while remaining faithful to the original card illustration. 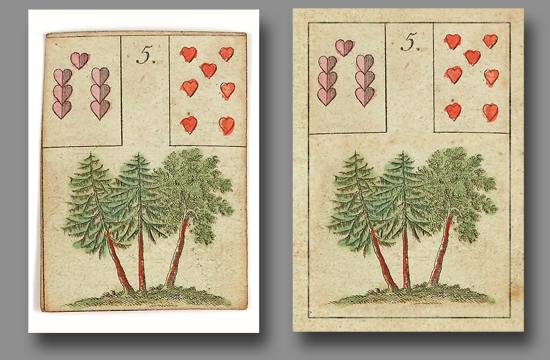 Price -$44.99 plus shipping. 250 copies of the deck are available, first made available to members of Tarot Professionals prior to public release. Shipping costs may be high for those who are not close to the shipping source.  I've heard people mention prices as high as $38 for shipping. For me, shipping to the East Coast of the USA was $8.05 for 2-3 day USPS Priority shipping.

Opinion - This deck contains my very favorite images of Lenormand cards published to date. I tend to prefer the old-style cards such as the French Cartomancy or Lo Scarabeo Lenormand, whose garish borders I removed to keep the old look (and to reduce the size of the cards). "The Original Lenormand" trumps those decks hands down with its aged, authentic character. The card stock is ideal, and I'm relieved it does not have a shiny new glossy look; the matte coating is lovely and soft in lighting and better honors aged cards.

If I had a wish to change the deck, the single and only thing I'd change is the greenish cast to the deck that sometimes appears. Otherwise, the cards, front and back, size and design, are everything I could have dreamed. 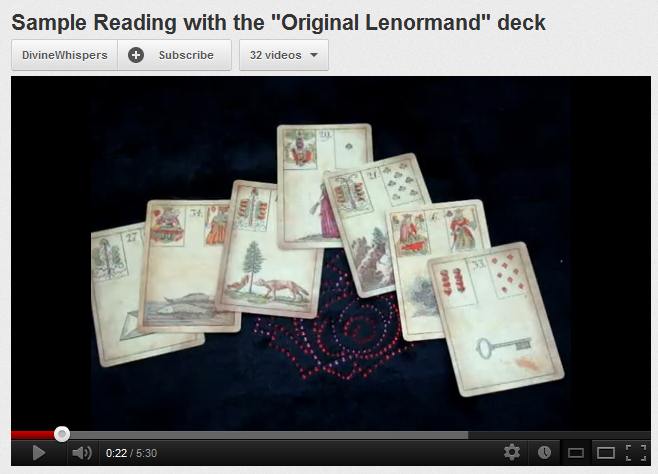 Other decks by this artist:

This page can also be found by going to tinyurl.com/original-lenormand