Tea with Me! (Tea Leaf Reading) "There is a great deal of poetry and fine sentiment in a chest of tea."

Squeeeeeeeee! My very first tea leaf reading! Won't you join me? What do you see in my cup?

This is a wonderful, smooth tea with mellow rose-flavored undertones.

I'm supposed to start at the handle ("things closest to me") and read in a counter-clockwise direction.

Closest to the handle, I see a giraffe. And another one just before him, with either something on his throat or looking back at the giraffe to his right. Funny, it looks like the giraffe on the left pooped and is looking back it, a gift for the giraffe friend behind him. Hmmmm...how very mystical!

I guess this tells me,

There's a story in this cup.

Come along with me and let's meet the players.

Before I saw that central "giraffe," I instead first saw that middle object as a "chair."
A chair in tea leaf readings means "a guest" or "an unexpected guest."

The Cup of Destiny book tells me that a chair means "someone is coming into your life, either an addition to your family or as an important new friend or romantic involvement."

Well, someone enters someone else's life here, and it happens at the bottom of the cup

(the hardest place to be in a tea leaf reading).

I looked up Giraffe in my new book, Tea Leaf Reading for Beginners, and learned that a giraffe means "distortion of a situation." And with two giraffes, they both perhaps have a distortion about where they are or what they're doing. Who's zooming who? It looks like the one in the back is left holding the poop that the one in the front dropped. So I say the one with the throat issue is the one who distorts for the giraffe behind.

Another giraffe interpretation is noted in the book that comes with the Cup of Desitny.  It says the following of a giraffe in your tea cup:

"A giraffe is an exotic, magical and strange creature that is held in great respect by the Bushmen of Africa where it is believed to possess supernatural powers. A giraffe in your cup symbolizes fortuitious coincidences, ,and the energy or positive frame of  mind needed to attract them into your life. If you maintain an open and optimistic attitude, plus a willingness to take a chance, you can create your own luck at this time. The Universe is listening."

I don't think I'll have any unexpected giraffes for guests. But if I do, I'm sure they won't mind that the house is not clean. But then, there is that wee little issue of giraffe poop on the carpet.

And call me crazy, but I saw the sign for Pluto on the left, although it is sort of taken apart a bit

I am still learning a lot about astrology, but as I look up the planet Pluto, I see that this little guy is a change agent.

"Pluto, the lord of the underworld, symbolizes the forces of deep transformation in our lives. A slow-moving outer planet discovered in 1930, Pluto's influence is in general most clearly noticeable as it distinguishes one generation from the next."

Sounds like the Death card in Tarot to me.

So perhaps the giraffes are headed toward a slow-moving change agent.

Will they get there?

The pooping giraffe is headed toward change. Good boy!

(Or girl, because I cannot tell with giraffes. Maybe the girls have longer eyelashes)

I also see the P as the victory rune called WUNJO.

Understanding, realization of ambition, success in romance and good health. Partnerships flourish. New beginnings are blessed with joyfulness. Your eyes are opened to the truth.

Wunjo is linked to a reward, a feeling of goodness and satisfaction, peaceful winning, and ultimate achievement. It contains the idea of everything going well because you are in total harmony with life.

Wunjo also implies close co-operation and companionship with other people, because joy is not usually a solitary emotion. When so much of life can be negative, it is important to allow Wunjo's joy to reach into every part of your life.

And they suggest this "Personal Interpretation,"

"Happiness is yours if you are willing to work for it. You must strive for balance and harmony in your life. Always look for solutions rather than dwell on problems. For happiness to last, it must be founded on truth and honesty. Hide from the truth and you hide from true happiness. Seek only what is good and right, and good fortune cannot fail to follow"

Yet LO AND BEHOLD....Lookie what  happened!

Once the cup had time to settle, things shifted! Our happy change agent...changed! 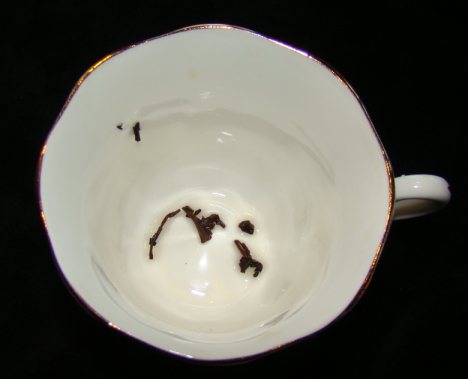 What used to be Pluto or the rune slid down to the bottom of the cup.

Also, to add to the new story,  the giraffe in the front is now spewing something from his mouth...or is he following something, a path or line? Whatever cut his throat, stopped his throat chakra, seems to continue forth, I suppose.  He can't help it. He looks sick. Poor giraffe. His friend behind him sees him, but there is not much he can do. The posture of the back giraffe looks slumped, not strong. I don't think he likes what he sees (or smells). To make it worse, if he  moves forward, he might step on the poop. But maybe the giraffe in the front sees the path as some sort of bridge (changes, an opportunity for growth).

There are dots to the top left of the cup. Dots indicate money, security. It does look like the giraffes are in the valley and that they'd like to find their way to the dots/money.

If the joyful, successful Wunjo rune tanked from its prominent spot at the top of the cup to the dregs of the valley of the cup....it would be like reversing the rune as time went on and the story unfolds. Things are slow in coming to fruition, and someone undergoes a difficult time or crisis with unhappiness or even misery involved. (EEP!)

The runes around Wunjo usually explain where the problem areas are, and with the planet Pluto having been intertwined with the Wunjo when I first saw it (and considering Pluto also got trapped in the avalanche to the bottom of the cup), it could be that "change could not happen." It could also be that, because the dots or money/success are nearest it, that those agents also were not reached as planned. The kite lost its wind source and fell to the ground. This rune reversed is dissatisfaction with performance, and a disappointment or possibly a delay.  It can also mean trouble caused by a third party, which causes frictions and delays.  Watch out for the dealings of opponents.

And just like in Tarot, there  are layers here.

On a very literal level, I also look into this cup and see two of my dogs. The one on the left is Baxter, who we groomed today, no easy task. It took 3 of us 3 hours, 2 tranquilizer pills (for the dog, not us), a muzzle and some serious teamwork to groom him. I have other dogs, and I can groom all 3 in just over an hour. But Baxter....he is....um.... let's call him *special.

The dog on the right (in my tea cup) represents another of our dogs, Lucy (below) who is "The Warden" and was very upset that Baxter was being naughty. 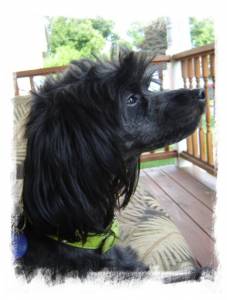 We had to lock Lucy in another room because she kept interfering and telling Baxter off every time he  snapped at us in fear of the dreadful clipper monsters. She meant well.

THEN....trying to get a big matt off of Baxter's neck and him kicking resulted in me nicking his neck and drawing blood and the cut was good sized. The line across the neck could be the cup, and the spewing line could be my fear that he may need stitches (blood pouring out, which it wasn't exactly doing, but you know how scary seeing red can be).

So the tea cup had a few stories to tell. At first I thought it wouldn't have much to say with so few leaves in it, but I actually think it was quite chatty!

Here's wishing  you a tea-filled week!

Learn more about tarot at our award-winning educational podcast.